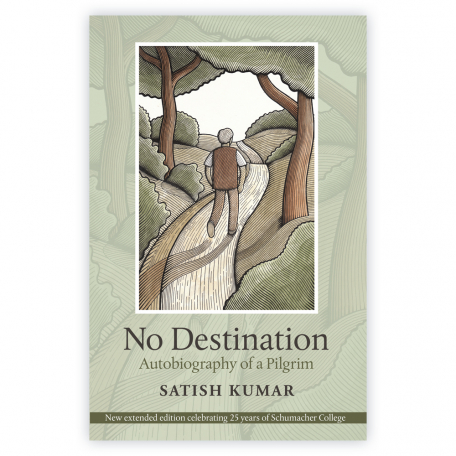 No Destination: Autobiography of a Pilgrim

No Destination: Autobiography of a Pilgrim (hardback edition, 2014)

When he was only nine years old, Satish Kumar renounced the world and joined the wandering brotherhood of Jain monks. Dissuaded from this path by an inner voice at the age of eighteen, he became a campaigner for land reform, working to turn Gandhi’s vision of a renewed India into reality.

Fired by the example of Bertrand Russell, he undertook an 8,000-mile peace pilgrimage, walking from India to America without any money, through mountains, deserts, storms and snow. It was an adventure during which he was thrown into jail in France, faced a loaded gun in America, and delivered packets of 'peace tea' to the leaders of the four nuclear powers.

In 1973 he settled in England, taking on the editorship of Resurgence magazine, and becoming the guiding light behind a number of ecological, spiritual and educational ventures. Following Indian tradition, in his fiftieth year he undertook another pilgrimage: again without any money, he walked to the holy places of Britain - Glastonbury, Lindisfarne, and Iona. Written with a penetrating simplicity, No Destination is an exhilarating account of an extraordinary life.

The new hardback 4th edition is published in 2014 to commemorate 25 years since the foundation of Schumacher College, with new chapters about the college and to bring Satish's story up-to-date.