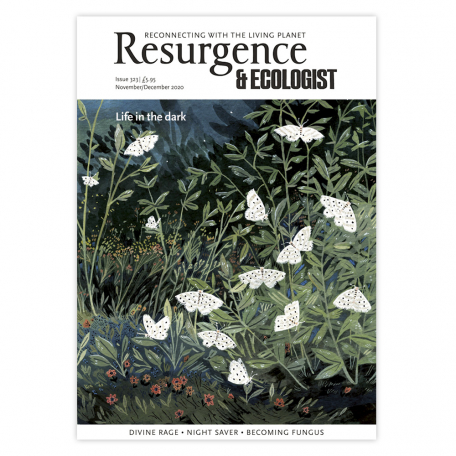 Life in the Dark

In this issue of Resurgence & Ecologist we celebrate the night sky. Lynn Houghton meets two scientists collecting data in Svalbard on climate change during the polar night, Matt Gaw warns us why we need to protect darkness from light pollution, and astrophysicist Krystal De Napoli tells us how dark sky constellations have informed Aboriginal astronomical traditions. We also hear some tips from grower Claire Ratinon on gardening by the moon, and Tiffany Francis-Baker takes us on a night walk.

Elsewhere, American lawyer Valarie Kaur shares her story of turning rage about social injustice into revolutionary love, and Emmanuela Shinta talks to Zion Lights about how the Dayak people are defending their land in Indonesia. In Arts, Carolyn Mazloomi introduces a group of women who are exposing racism in the United States through the powerful medium of quilting.